For the New Testament, there exist numerous textual traditions or chains of copying the New Testament that all stem back to the earliest
manuscripts (see the map above for examples); The Byzantine, Western,
Sinaitic, Coptic, Armenian, Ethiopic and Syrian copyist chains

From Islamic history we learn that there were separate early schools of teaching the Qur’ān in various provinces and countries, led by the best
reciters (Qurra) of Muhammad (pbuh); Ibn Masood, Ubayy Ibn Ka’b,
Ali Ibn Abi Talib, and Ibn Abbas. When Uthmān collected the first
official copy of the Qur’ān , some of these authorities differed with
his text, but their texts were forcibly burned by Uthmān. The variants
of these early authorities are quoted verbatim in the classical
commentaries and other works written by eminent Muslim scholars of the
time (see page 67), but the entire variant texts were burned and lost.
From Uthmān’s original, seven readings or ways of recitation developed,
though of these only the Hafs and Warsh remain today. This can be
illustrated as follows 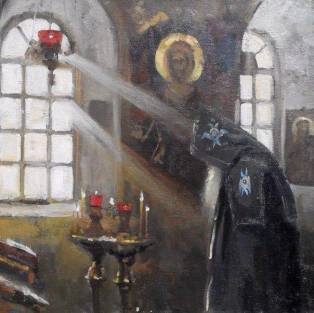